So, if you’ve read all four books in The River Series, you know who Nate Hawthorn is. If you haven’t read the books then, take heart — this is not a spoiler alert of, perhaps, the biggest twist in the entire series.

So, who is Nate Hawthorn? In short, he’s a fictional overnight radio host. But I won’t say more than that.

Now, long before I’d ever discovered Ben Hunter, I knew Nate would have to work in radio in some form or fashion. But as soon as I first read about Ben, I knew that this maverick needed to be a part of my story.

Problem was, Ben would’ve only been nine years old when Nate made his radio debut in 1929. (Ben didn’t begin hosting overnight radio until 1949.) To solve this space time continuum riddle, I simply modeled Nate after Ben.

So, who is Ben Hunter? 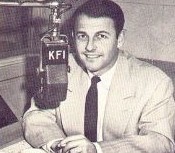 Though you might’ve never heard of him, Ben Hunter was the guy who changed the public perspective of overnight radio (and radio hosts as a whole). Before him, there were other overnight radio hosts, but none of them did what Ben did.

He spoke into the mic.

While this may seem like an absurd tidbit to bring to light, for overnight radio hosts in Ben’s day, this was monumental. Most laid down to slumber (literally) while their “engineer” changed the records all night.

But not Ben. Not only did he speak into the mic, but he invited his listeners to call in — and he invented a system for putting them live on the air, which had never been done before.

Put some bozo caller live on the air? You must be crazy!

He almost got fired for it, too. But by the time his bosses were informed third-hand (I guess they never stayed up late enough to listen to his show) that he was putting callers on air live, Ben had already gained a cult following, including well-known celebrities of the day like Judy Garland and Elizabeth Taylor.

There was no stopping this sensation at that point, and it was green lights for Ben to run his show as he pleased.

Ben’s “Night Owl” show was so popular that his fans developed their own support group called the “Night Owl Club”. They met once a month (in the daytime, usually on a Saturday). Planning this was quite a feat considering this was long before the days of social media, texting, cell phones or email. How all those random fans found each other, I’ll never know. But they did. And so did their beloved radio host. To his fans’s delight, Ben occasionally made a guest appearance.

Ben was a likeable guy, too. He listened to the people who called in, and he conversed with them in a natural and entertaining way. He gave his listeners a reason to turn their radios up when the song ended. Ben’s callers, who listened faithfully night after night, felt connected to both their radio host and each other. No longer were they alone in the darkness.

During Ben’s tenure at KFI Los Angeles, overnight radio ads appeared for the first time. This had never been done before because the assumption had always been, “No one’s listening anyway.” What a shock to discover nighttime listeners were as much or more engaged than their daytime counterparts!

Ben Hunter’s Night Owl show ran for about 11 years, but his legacy continues on even today. After he shifted to hosting television shows, Ben once again found a way to do something that had never been done. On his “Ben Hunter Movie Matinee”, he featured orphans who were available for adoption. His compassion and spotlight on the issue helped remove stigmas and pave the way for others to use broadcasting as a means of promoting adoption.

Ben also became an author. In his book, The Baja Feeling, Ben recounted (with humor) what life was like for he and his wife Marge, traveling throughout Mexico, letting that ‘Baja feeling’ guide their journey, and searching for the perfect location to build their retirement house. One of their biggest lessons during their home build was learning that Mañana doesn’t mean tomorrow — it just means “not today”. (You can read the story of modern fans who set out on their own adventure to find Ben’s home here.)

If you have memories of Ben, I’d love to read them in the comments below!

19 thoughts on “Who is Ben Hunter? Discovering the inspiration for Nate Hawthorn”